The recent call of the 2,500-TEU capacity Safmarine Nuba at the Matadi Gateway Terminal (MGT), an ICTSI Group company, opens the door to major new shipping system benefits for the Democratic Republic of the Congo (DRC).

The call, which took place at the end of January, marked the first call by a gearless containership and the first by a vessel with a capacity as high as 2,500 TEUs. The deployment of a vessel of this size unlocks economies of scale as well as provides the most cost-efficient means of serving the capital city of Kinshasa. Use of any other port gateway entails substantial additional land transport costs dramatically pushing up the overall container transport cost from point of origin to destination.

The transit along the Congo River is also time competitive – it takes just eight hours from the Banana Roads, at the head of the Congo River, upstream to Matadi, compared to approximately five hours by road when optimum conditions are available.

“The MGT is built to handle vessels of up to WAFMAX dimensions and as such the Safmarine Nuba was straightforward to berth and work,” explains Tim Van Campen, MGT director general. “We see this,” he elaborates,” as a step on the road to handling even bigger vessels as demand builds, eventually up to WAFMAX dimensions from direct calls.”

MGT, with support from the Government of DRC, has a two-step plan in place to realize strategic dredging in the Congo River up to a draught of 12.5 meters thereby opening the door to Panamax class vessel calls. This will be demand triggered as will a third phase, under development, which will facilitate access for the slightly larger WAFMAX vessels, which will require a draught of 14 meters.  Handling over the quay at MGT is undertaken by two Terex Gottwald Model 5 mobile harbour cranes, each able to handle up to 60 tons when working with an automatic twin-lift spreader and 50 tons in a single lift. Maximum working radius is 51 m. A third Kone mobile, now on order, will soon be installed, providing the ability to turn a 2,500-TEU capacity vessel in under 12 hours.

Container clearance from the terminal is the most efficient in the DRC averaging around seven days, half the time typically taken and thereby promoting further supply chain efficiencies. The advances made in this respect have also served to double the terminal’s annual capacity from 175,000-TEUs to 350,000-TEUs.

“Progressively MGT is fulfilling its potential and unlocking scale economies and service efficiencies for cargo owners,” underlines Hans-Ole Madsen, ICTSI Senior Vice President and head of EMEA. The terminal is having a positive impact right along the supply chain, and is delivering tangible practical benefits to cargo owners, a scenario we expect to grow as demand builds, even larger vessels are phased in and the terminal reaps the benefits of comprehensive continuous improvement programs. The Safmarine Nuba represents a ground-breaking ‘first’ and we are very confident that MGT can deliver further efficiencies and consolidate and expand its role as the premier container gateway for the DRC.

“There is always competition,” adds Madsen, “but the logic of using Matadi, the closest port gateway to Kinshasa, where virtually all the cargo goes, is irrefutable. If you start your overland journey from points such as Banana or Pointe Noire the additional overland transport costs, compared to using Matadi, will work out to be more expensive than the entire sea-freight cost from Shanghai to Matadi! We are also working with the relevant authorities to enhance the rail link between Matadi and Kinshasa, the only direct uninterrupted rail link between a port gateway and the capital city. Matadi is by far the logical choice,” he concludes. The 2,500-TEU Safmarine Nubu alongside at the Matadi Gateway Terminal which is progressively facilitating larger vessel calls and unlocking the associated scale economies. 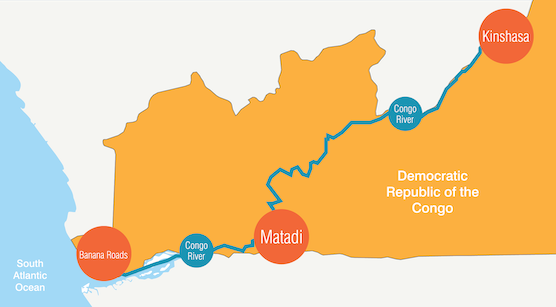 Matadi, located on the left bank of the Congo River, 92 miles upstream, is the closest port gateway to the DRC capital of Kinshasa and offers major savings in overland transportation.

The Matadi Gateway Terminal (MGT) is a joint venture company between, International Container Terminal Services Inc. (ICTSI), The Ledya Group and SCTP SA. ICTSI operates 32 terminals in 19 countries and is recognized to be a leading developer, manager and operator of gateway container terminals of different sizes serving extended hinterlands including cross border.

MGT opened for business in mid-2016 and is a state-of-the-art facility developed at a cost of USD100 million.

Headquartered and established in 1988 in Manila, Philippines, International Container Terminal Services, Inc. (ICTSI) is in the business of port operations, management and development. ICTSI’s portfolio of terminals and projects spans developed and emerging market economies in the Asia Pacific, the Americas, Europe, Middle East and Africa. ICTSI has received global acclaim for its public-private partnerships with governments divesting of their port assets to the private sector.