Manufactured by Shanghai Zhenhua Heavy Industries Co. Ltd., the new quay cranes can easily service the largest vessels plying intra-Pacific routes, with reach of up to 24 container rows across. On the landside, the five RTGs are expected to further improve the terminal’s efficiency to fully match demand.

Fortino Landeros, CMSA chief executive officer, said the new cranes will contribute to CMSA’s leadership performance in the national and international logistics chain: “With the arrival of the cranes, CMSA will be able to serve larger boxships and further increase operational capacity. Along with the terminal’s current second phase expansion, this would further consolidate our position as the leading container terminal in Mexico.”

Once deployed, the CMSA fleet will be composed of 8 quay cranes and 21 RTGs – among the largest and most advanced in Mexico.

Apart from the new cranes, ICTSI is currently beefing up CMSA’s capacity as part of its second phase expansion – including the terminal’s yards and entry and exit gates, and investments in cutting-edge technology and training of personnel.

Among the fastest-growing marine gateways in America, CMSA achieved its first year-to-date, four-millionth twenty-foot equivalent unit (TEU) milestone last July. It is likewise the only terminal in Manzanillo with land for expansion. 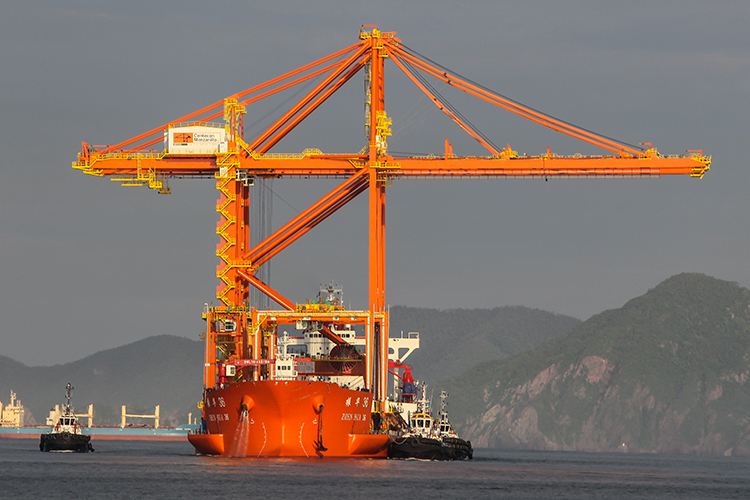 New cranes for ICTSI Mexico. International Container Terminal Services, Inc. recently acquired a pair of new quay cranes and five rubber tired gantries for its Mexican subsidiary Contecon Manzanillo S.A. de C.V. at the Port of Manzanillo, Mexico, as part of the terminal’s second phase expansion. Photo shows the arrival of the cranes on board the Zhen Hua 36 last October 2019.

About Contecon Manzanillo SA de CV (CMSA)
In June 2010, ICTSI signed a 34-year concession for the development and operation of the Second Specialized Container Terminal (TEC-II) at the Port of Manzanillo in Mexico. ICTSI established a subsidiary, Contecon Manzanillo SA de CV to operate the Port of Manzanillo. Ideally located to serve the growing Asian trade, CMSA is Mexico's gateway to the Pacific coast and is close to major consumer markets, such as Mexico City and the country's largest industrial areas. (www.contecon.mx)