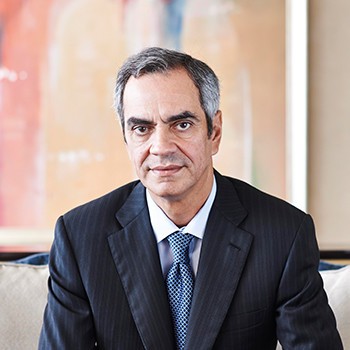 Enrique K. Razon Jr. is Chairman of the Board and President of ICTSI*.  He is also Chairman of Bloomberry Resorts Corp. (BRC), the developer of Solaire Resort and Casino.  BRC is listed on the Philippine Stock Exchange.

Mr. Razon belongs to the third generation of a family involved in the business of marine cargo handling.  The Razon Group has a long-standing reputation of being pioneers and innovators in the management and development of ports, terminals and related facilities.  The Razon Group’s proven track record stems from more than 90 years’ experience in integrated cargo handling, stevedoring and other port services in the Philippines and abroad.

In 1987, the Razon Group and the Soriano Group incorporated ICTSI, initially to bid for the Manila International Container Terminal (MICT) in the Philippines. After winning the MICT contract in 1988, Mr. Razon spearheaded the MICT’s development program.  The MICT today is the country’s premier international gateway.  ICTSI also operates seven other terminals in the Philippines.

After consolidating and strengthening its base and flagship operation at the MICT, ICTSI launched an international and domestic expansion program in 1994.  Today, the Company is recognised as a world leading operator, innovator and pioneer in the field of port management.

Mr. Razon’s other investments are in power, mining, oil and gas exploration, and leisure facilities.
Mr. Razon is a member of the Management Association of the Philippines, the US Philippines Society, ASEAN Business Club, and Philippines, Inc.

The De La Salle University in the Philippines has conferred on Mr. Razon the degree of Doctor of Science in Logistics honoris causa.